New Transport Accident Commission research shows illegal mobile phone use while driving is falling but more than half of Victorian drivers still admit to using their handheld devices at the wheel.

The TAC has ramped up its pleas to drivers to stay off their phones after 56 per cent of respondents in a survey of nearly 1000 Victorian drivers conducted late last year admitted to illegally using their phones while driving within the previous month.

While the figure had decreased from 62 per cent since the previous year's survey, TAC Chief Executive Officer Janet Dore said it showed many Victorians were ignoring the deadly link between distractions and road trauma.

"Unless drivers are totally focussed on the task at hand, they are not in a position to respond to something unexpected like a pedestrian stepping out onto the road or a car stopping in front of them," Ms Dore said.

"We have already seen too many instances where that second or two of inattention has resulted in death or serious injury. The responsibility for reducing road trauma is shared by every road user and being attentive at all times when using the road network is part of that responsibility."

Victoria Police Assistant Commissioner for Road Policing Robert Hill said lifting the penalty for using a handheld mobile phone while driving to four demerit points and $433 had made many motorists rethink using their phones while driving.

"It appears that people are starting to take the message around distractions on board but we need the Victorian community to make this behaviour as socially unacceptable as drink driving," Mr Hill said.

"Looking at a downward curve won't come as any comfort for the families or friends of the next person to die because someone couldn't wait to take a call or read a text."

Reading and writing text messages while stopped at the lights was more common, with 36 per cent saying they had read a text at the lights. Eighteen per cent said they had written a text while waiting for a green light.

Females (52 per cent) were more likely to say they never made or answered calls while driving than males (41 per cent).

Drivers aged 26 to 39 were most likely to use their phones while driving, with only 28 per cent saying they never made or answered calls. 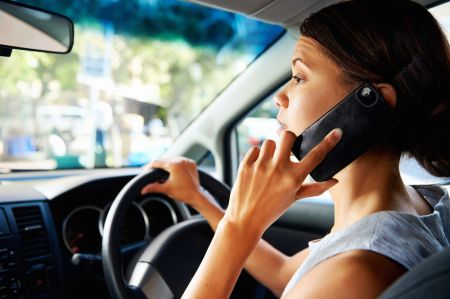