An increasing number of Victorians believe they should be able to exceed speed limits, according to the Transport Accident Commission’s annual survey of the state’s motorists.

The TAC has released findings from the 2017 Road Safety Monitor, a survey of 1742 Victorians, which shows fewer people support a ‘low tolerance’ approach to speeding.

Thirty-five per cent of respondents believed drivers should be able to drive up to 105km/h in a 100km/h zone, a proportion which has risen from 24 per cent in 2013.

Similarly, 13 per cent of respondents believed driving up to 65 km/h in a 60-zone was acceptable, compared with eight per cent in 2013.

“The majority of Victorians are law-abiding motorists and understand the dangers of speeding, even at low levels,” Mr Calafiore said.

“While our research shows the majority of people don’t speed at all, an increasing proportion of motorists still see low-level speeding as acceptable.

“We understand that some in the community would like to drive faster, but we can never value a couple of minutes in reduced travel time ahead of our lives and the lives of others.”

Mr Calafiore said the risk of crashing and being seriously injured or killed increased with even small increments in travel speed.

“While speed is not always the cause of a crash, the speed of a vehicle at impact will always determine the extent of the injuries that result,” he said.

“Imagine if someone you cared about never came home because someone wanted to get home a little sooner,” Mr Calafiore said.

Other key findings include:

To full survey results can be found here. 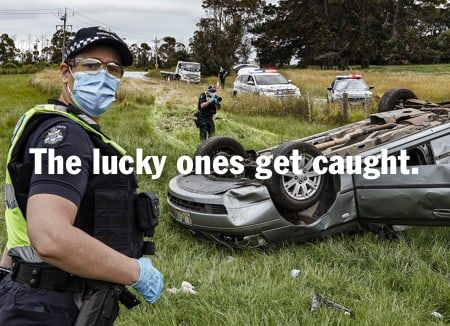