Taking effect on 26 April 2021, the updated rule makes it mandatory for motorists to give riders at least one metre clearance when overtaking on roads up to 60km/h, and 1.5 metres on roads with speed limits above 60km/h – clarifying the existing guidelines around passing riders and brings Victoria into line with other states.

Last year there was a welcome drop in the number of lives lost on our roads across all user groups – except cyclists, with 13 people losing their lives compared to the five year average of ten riders dying each year.

Under the updated rule, drivers and motorcyclists can briefly cross painted lines to give cyclists the space they need – including solid lines, double lines, painted tram lane lines and painted islands – but only when they have a clear view ahead and it’s safe to do so.

Cyclists need to follow the road rules too – including riding predictably, riding in bike lanes when they are provided and using hand signals to change direction.

Consultation with motoring and bicycling bodies and other key stakeholders to ensure the rule fits into practical, everyday situations has occurred. The law will attract maximum court penalties of up to $1,652 and on the spot infringements of $330. Improper overtaking or passing offences incur two demerit points.

It comes as the community is invited to have a say on the next phase of the Labor Government’s pop-up bike lanes project which will make bicycle riding safer in the city’s inner north.

Pre-construction engagement is starting on the 10km Darebin-Yarra connectors, which will enhance existing routes and run through Fairfield, Northcote, Clifton Hill and Fitzroy – making it easier and safer to ride to and from the CBD.

Works expected to begin in June will link and improve existing bike routes, and add signage, road markings, crossing points and connections to off-road paths. In some locations, barriers will be installed to separate cyclist from motorists.

In addition, a trial to understand how e-scooters could be safely incorporated into the transport network will start later this year. It will run for up to a year in three council areas chosen through a targeted expression of interest process, regulated by the Department of Transport.

“Last year was a horrible year on our road for cyclists – these measures will ensure everyone has a safe place on our roads.”

“This new rule provides a clear direction on how much space motorists should give cyclists when passing. We all share the roads and need to look out for one another.”

“Whether it’s more train or tram services, trialling pop up bike lanes or e-scooters – we’ll continue to look at measures that provides a range of options for Victorian travellers.”

“The message is clear - when you see a cyclist slow down, if you have a clear view ahead, choose a safe gap in traffic to pass at a metre or more. It can make all the difference in everyone making it home.”

Find out more about cycling safety 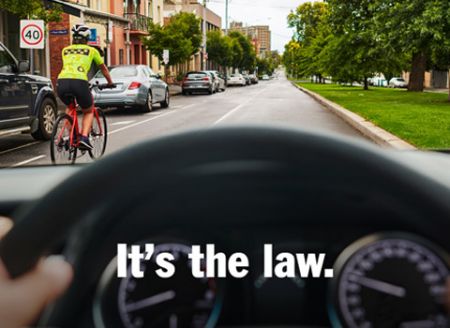