Young men who might be tempted to drink and drive this footy finals season are being targeted with an online infomercial made by the Transport Accident Commission (TAC).

“Booze Busted” highlights the expensive penalties for drink drivers and has been developed to specifically target men aged 18-29 who intentionally drink drive and have little regard for the law.

The campaign will be advertised in pubs and drive-through bottle shops, as well as hotel bathrooms and on posters in bars around Melbourne and in regional Victoria - you can view Booze Busted online at www.boozebusted.com.

TAC Senior Manager of Marketing Simon Strahan said close to a quarter (23 per cent) of Victorian road fatalities involve a driver or rider with a blood-alcohol concentration of greater than .05.

“Almost 80 per cent of drink drivers killed are male with the majority aged 21 to 39 years,” Mr Strahan said.

“These figures illustrate that drink driving is inherently a male problem but all of us, women included, cannot afford to ignore the warnings.

It reminds Victorians that drink-driving is socially unacceptable and potentially deadly.

The campaign will also be present on advertising boards around the state, including on trailers at local football grounds with the ‘Don’t risk it’ message on one side, and standard beer measurements on the other.

Today’s Eastern Football League Division 4 grand final at Walker Park in Nunawading is just one location the trailers will be placed, communicating directly with the public to stay safe on the roads.

“We know this is an exciting time for local clubs and towns as it’s the business end of the season and we ask all of you to plan your trips to and from the local footy ground before you leave home,” Mr Strahan said.

“Catching a lift with a designated driver who isn’t drinking alcohol is a great example of planning ahead.”

“We ask everyone to take extra care and remember that if you drink and drive, you’re a bloody idiot.” 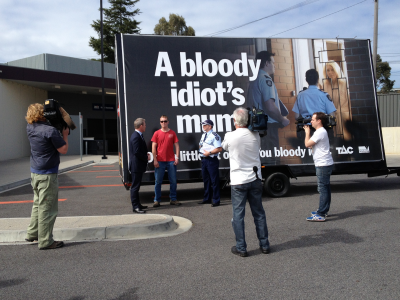 Pictured above:  TAC Senior Manager of Marketing Simon Strahan, TAC client Alex Wall and Victoria Police Inspector Tom McGillian address the media on drink drive campaigning and enforcement that will be around throughout  September.