Cracking down on drunk, drugged drivers

The Andrews Labor Government is cracking down on some of Victoria's most dangerous drivers who mix alcohol above the legal limit with illicit drugs and then get behind the wheel.

These new offences are an Australian first and drivers who are caught with alcohol and illicit drugs in their system will now face a minimum 12 month licence cancellation and court fines up to $4550* for a first offence.

"The Andrews Labor Government is cracking down on drink and drug drivers to make our roads safer and to help reduce road trauma," Ms Hutchins said.

Victoria Police will also be able to impound the vehicles of first time offenders who record a blood alcohol concentration (BAC) of 0.10 or higher.

For repeat offenders, the maximum fines will range between $13,650* and $40,959*, depending on blood alcohol level and previous offences. They will also receive a minimum two-year licence cancellation.

Vehicles can be impounded for up to three months or even permanently for repeat offenders.

The tough new penalties are the subject of a new Transport Accident Commission campaign to be launched this week.

Currently there is no offence for combined drink and drug-driving. Offenders can be charged with, or convicted of, either a drink-driving or a drug-driving offence but not both.

"We know that drivers who have both alcohol and drugs in their system are 23 times more likely to be involved in a fatal crash, compared with drivers who are drug and alcohol free," Ms Hutchins said.

"We are fed up with people who mix alcohol and illicit drugs and the risks they pose to Victorian families on our roads."

These harsher fines and penalties send a strong message about the dangers of combining alcohol with illicit drugs and driving.

The new penalties will help deter and prevent repeat offenders by mandating alcohol interlock devices and driver education programs for those being relicensed.

In this year's Victorian Budget, the Andrews Labor Government committed $15 million for 10 new drug and booze buses. The larger fleet will let police test 100,000 people a year for drugs and take more alcohol and drug-affected people off our roads. 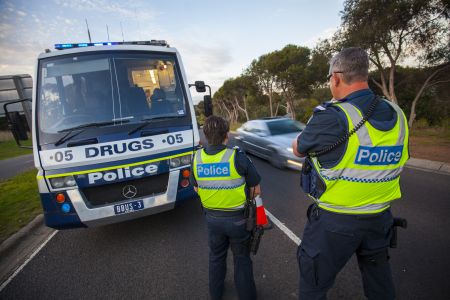 The police testing for drink-drug driving